Most shark repellents on the market are unproven and most are intended for specific situations. Many just do not work beyond the short term because they don't offer any real threat to the shark. Sound and electronic devices have been shown not to work for long for the simple reason that the shark is scared away at first, but then realizes that there is no real danger. Sharks have not survived for hundreds of millions of years because they are stupid. These devices also tend to be very expensive. Every one is a trade off in that the farther the signal travels in the water, the shorter the battery life is going to be. They provide some protection during various water activities and may convince a shark not to attack. Shark Sneeze is not intended for such use, being an emergency device for people floating in the open ocean, especially in lifevests and life rafts.

Electronic magnetic devices will confuse the shark, but a strong magnet can do that too because even a magnet is stronger than the earth's magnetic field that the shark uses for navigation. If you can make the shark go away, then the magnetic confusion may well prevent the shark from finding you again. The Shark Sneeze container cover includes a powerful N50 12mm x 3mm Neodymium Rare Earth Super Strong Magnet, thus even when the container is empty or lost in the water, the magnet in the cover secured by a lanyard will still provide some protection. The multi-use container is bright orange to increase your visibility to searchers.

UPGRADED: The medium and large sharksneeze orange container products have now been upgraded to 4 magnets to confuse the shark at a greater distance. There are magnetic devices with claims that magnets will repell the shark. We do not make that claim. We claim that the magnets will confuse the shark's direction finding and after it flees due to the chemical parts of SharkSneeze, it will be too confused to return. We doubt it will want to return after encountering SharkSneeze, but we want to use all the tools at our disposal.

Today, on 05/28/2021a news article in Science Magazine confirmed that sharks navigate using the earth's magnetic field. This was obvious to us, but more and more scientific evidence supports this theory.

Photos below show the magnets inside the two different sizes of SharkSneeze. 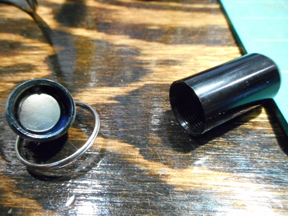 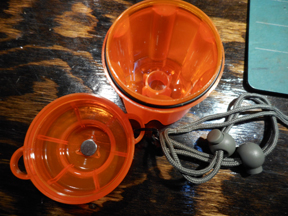 What the inventors of other products don't seem to realize or simply ignore is the principle of risk and reward. There is no risk provided by any of the devices beyond an initial shock effect. If there is a low level of risk and a high or potentially high level of reward, the shark(s) will be back.

In the case of one device shown on an investor/inventor television show that cost thousands of dollars, it used underwater speakers that played the sounds of killer sharks. The inventor was going to place speakers on the underside of dive boats and the like with installation costs of many thousands of dollars. In the test shown on the program, chum was dumped into the water that attracted a number of sharks that went into a feeding frenzy. The device was turned on and the sharks scattered. It was only a matter of minutes before they returned. The inventer did not impress the potential investors.

In reality, animals are lazy and risk adverse, rather like most people. Even the big cats would rather steal a meal from another cat than go out and hunt for one themselves. Sharks are no different in that regards. Apex predators would rather steal someone else's meal than put in the effort to hunt for themselves, given the opportunity.

The sharks realized that there was no real risk. But perhaps more importantly, they knew that there was a high level of reward -- all the bloody chum in the water. Obviously, with a lower level of reward, a shark repellent does not have to be as effective as deterring sharks in a frenzy, but it does need to present a real risk to the shark, and nothing on the market does that other then BP-DNA's Shark Sneeze Shark Repellent. 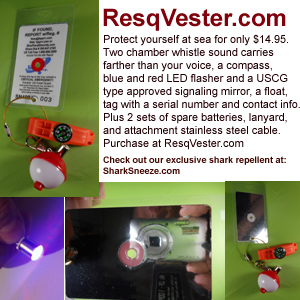 The Shark Repellent used by the U.S. Military for many decades contained black dye together with Copper Acetate in a wax form that disolved in water over time. Copper Acetate is believed to minic the smell of dead sharks. Other shark repellents have used Sodium Layryl Sulfate Powder (which also foams and makes it more difficult for the shark to see you). The effectiveness of both copper acetate and Sulfate Powder can be argued, but it has been used for a long time and has proven some effectiveness. Its effectiveness is increased by the black dye, making it more difficult for the shark to see you in the water. In addition, for proprietary reasons we also include some activated charcoal that also works to obscure the water as part of its purpose.

Sharks rely on their other senses as well as eyesight, but they only see in two colors, either white/red for sharks that live in deeper depths and white/blue for sharks that live near the surface. It does not take alot to obscure their vision. Our example photographs of SharkSneeze dispersal and saturation in water (for 96 hours) illustrate this point. 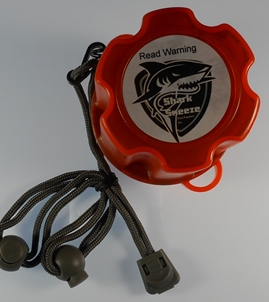 We all know that Sharks have a highly developed sense of taste/smell. They are not going to like a chemcial or other substance anymore than we would want to eat it. We use this fact to our advantage. Our repellent gives the shark all sorts of nasty things to taste and smell, greatly raising the risk compared to the reward. The ingredients will not harm a shark or other marine life in the long term but are significant enough to make a shark want to go away and go far away as fast as possible. Look on the internet and learn how hagfish secretions drive sharks and other predators away in a milli-second and you will understand more fully how sharks react to SharkSneeze.

Secondly, we include ground Ancho Chile (el mercado), the hottest possible. It is 1.1 million kelvin. Think of being sprayed with pepper spray for sake of comparison. Not only does the powder get into the shark's mouth and eyes but it will affect the gills too. These are sensitive areas.

Third, sharks know to keep away from underwater volcanoes and steam vents. What is one of the main substances the shark will encounter there? It is Sulfur. Our shark repellent includes 99.8% Pure Sulfur Powder. Really, who thinks a shark is going to swim towards an underwater volcano? Even diluted in the water for an extended length of time, this alone should keep all types of sharks away at a good distance.

Forth, we don't stop there. Our product includes Denatonium Benzoate which is the MOST BITTER SUBSTANCE known to man. It is used in antifreeze, nail biting products and in other ways. Now it is being used in our product. No shark is going to want to taste that, anymore than you want to drink antifreeze.

Finally, we include finely ground Aluminum Flakes as the strongest deterrent. These flakes will float for a period of time, depending on how rough the seas are. They will gradually fall down through the water discouraging any shark from attacking by coming up below you. The flakes will get into the shark's eyes, mouth and gills. You know how bad it is when you get a little particle of something in your eye. You can't really think about anything else until you get it out. Imagine if that particle was a sharp edged aluminum flake. The shark encountering even one of these things will have the same reaction and will flee. It will certainly forget all about attacking you. Again the actual and meaningful risk of a further encounter far outweighs any possible reward. 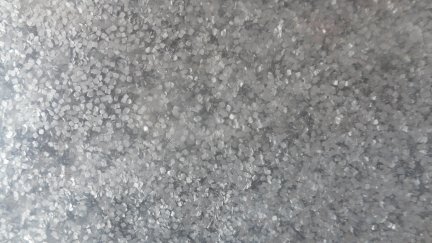 Sharks do not regularly encounter people in the water, and they will bite you mostly out of curiosity to try to figure out what you are and if you are good to eat. BP-DNA Shark Sneeze Repellent will tell the shark you are not good to eat, before it bites you, and generally will discourage the shark at a safe distance. Hopefully the shark will remember these things when it encounters anyone else in the water.

A photo of a bag of aluminum flakes is shown left. The flakes are each roughly the size (sizes vary) of the head of a stick pin.

A little nibble for a shark is a serious injury for you.

Do Sharks Sneeze? I would say YES, although they don't sneeze air. If a shark gets some particle or irritant in its mouth or gills, it does the equivalent of a sneeze to expell the irritant. Shark Sneeze is a serious irritant to drive the shark away.

Sharks run away from hagfish and their mucus. Sharks have a similar reaction to SharkSneeze. This also demonstrates the principal of risk and reward quite well. 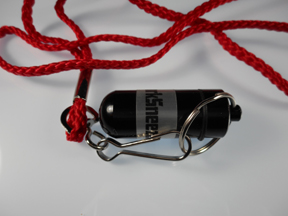 BP-DNA Shark Sneeze Repellent is intended for emergency use in conjunction with the use of life vests or a Personal Flotation Device (PFD) and for use with emergency life rafts. It is not intended for use by swimmers, divers or when continuous protection is required. Disbursal is manual and techniques are described in the Instruction Guide. Do NOT inhale. May stain surfaces.

We begin with a video of SharkSneeze dispersal. We test one tablespoon in a glass container 3 inches in diameter and 12 inches high filled with fresh water. Keep in mind that salt water is much denser and dispersal will be slower in the ocean than in the video. SharkSneeze accomplishes a number of important things. First, the heavier pieces of the aluminum flakes drop out of the powder as it disolves in the water. These protect you immediately from a shark strike from below while the dye and other ingredients are mixing with the water around you. The concentration dispersing in the water will also protect you from strikes from the side Finally, the shark will not even be able to see you. The fact that sharks only see in black (or one color) and white will also help.

Existing shark repellent works to a large extent by cameoflage -- by clouding the water so a shark can not see you. SharkSneeze uses -- in part -- the same idea. No shark repellent is of much value if it quickly settles out of the water. Our settlement test over 24 hours includes photographs every 4 hours which demonstrate that after the first 4 hours there is very little additional settlement. The water remains black and then dark brown for many hours. Ultimately we photographed it every 12 hours and after 96 hours when the test ended, there was very little settlement. In addition, a layer of SharkSneeze remains floating on the water and only sinks with agitation (wave movement in the ocean) clouding the water for even longer. The clouding is dense enough to block the shark's view of you for a day or more. The particles that float on the surface also will be smelt and tasted by the shark and will tend to keep the shark from surfacing near you. The aluminum powder consists of flakes of all sizes and many of the finer flakes remain floating in the water, providing continuous protection, as do the other ingredients for more than 96 hours. The Shark Sneeze powder expands about 6 times its original size in water that enhances the cameoflage effect.

SharkSneeze Distribution in Water (Our apologies. This video must be run sideways.) The test glass jar is illuminated from behind with a LED panel as well as front lighting. It is shot in 720p HD. The test is in fresh water, dispersal in salt water will be slower.